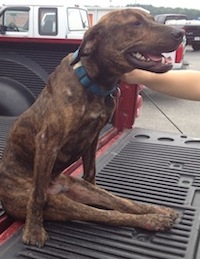 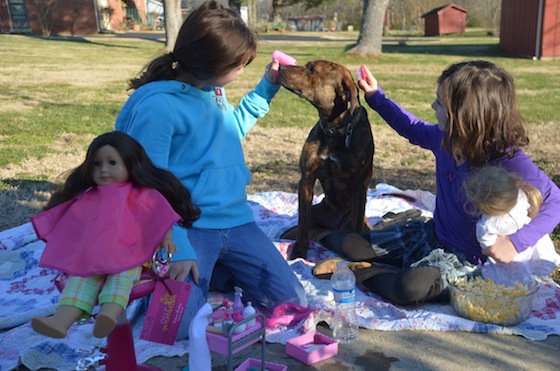 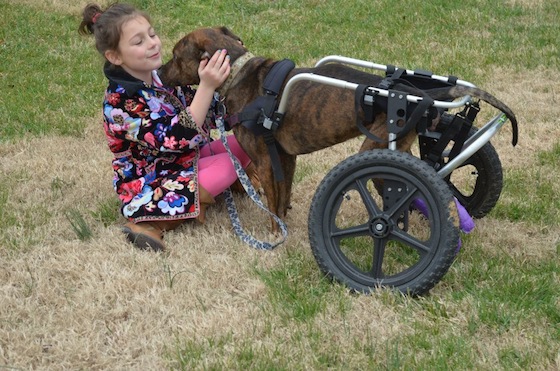 Imagine not being able to use your legs, and dragging yourself everywhere you want to go. Now, imagine doing all that while not knowing where you were going to sleep or where your next meal was going to come from.

That was the reality for Trooper, a gorgeous two year old plott hound, who had no hind limb function as a result of an unknown trauma. This did not stop him from dragging himself out of the woods almost every afternoon to play with the neighborhood kids in his native Tennessee. One day the parents of those kids he loved to play with reached out to a local rescue for help and this is where Trooper’s story really starts.

Snooty Giggles rescue took him and in and got to work. Trooper went to the vet, where it was determined that his injury was too severe and too old to be fixed. So he was fitted with a cart so he could be more mobile without having to drag himself around.

Trooper loves to play with other dogs, especially out of his cart when he can wrestle with them. During his time as a wild dog he developed some serious skills at dragging himself around and loves his cart free time. Trooper spent almost a year in a foster home and during this time Snooty Giggles teamed up with PAWS New England to try and find Trooper’s perfect match. One day a woman in Massachusetts decided she wanted to adopt him. Everyone was excited for the brave guy and Paws New England arranged to transport him to his new home and it seemed like Trooper got his happily ever after. The joy would not last however, as after only a short time his adopter decided he was just too much for her to handle.

This is when Trooper met his guardian angel in Jo-Ann Dooley.

After desperate text messages from Paws co-founder Joanne Hutchinson, Jo-Ann, who had been following Troopers story on Facebook offered to foster him until a permanent place could be found. Little did she know that her home would become that permanent place. Jo-Ann was in for a surprise when Trooper arrived at her home. He spent the first couple days completely shell-shocked from his long journey and changing places so many times. His back legs were bandaged to protect the sores he developed from dragging himself around ‘ his favorite pastime.

Jo-Ann would soon learn that Trooper was not house-trained and she and boyfriend Wells would go through a lot of laundry and patience trying to get him on a schedule. They tried belly bands and new foods and everything they could think of to figure Trooper out. Meanwhile, continuing to care for their pack of dogs. Between changing bandages and cleaning up countless amounts of urine and feces, Jo-Ann would think she had finally met her match.

When asked about it this is what she had to say:

One of the things about Trooper is: It’s all in his eyes. What he wants, what he needs, how he feels it’s always in his eyes. I stopped using belly bands early on and never used diapers as they both caused him so much shame, I just couldn’t bear the thought of humiliating him. At one point when I was at the end of my rope, I sat down with Trooper and looked into his eyes and said, “You have got to help me help you in order for this to work. It’s not working and we need to figure this out together. No more peeing in the house, no more overnight poop accidents, we have to get this together.

And get it together they did. Trooper goes to doggie daycare at John Gagnon’s Pet Resort where Jo-Ann works every day and sleeps with one of Jo-Ann and Wells’ dogs every night on his very own air mattress. Trooper loves going to daycare and playing with all the other dogs, who have accepted Trooper with open paws, wheelchair and all. Once they had the routine down, Jo-Ann and Wells decided that Trooper was where he belonged all along.

Trooper’s story should remind us all that each special needs dog has a home out there somewhere and as long as you never give up, it can be found. We invite you to follow Trooper’s story via his very own facebook page at Trooper the Love Hound.